Home » Blog » Everything You Wanted to Know About Roof Mold

Everything You Wanted to Know About Roof Mold

Everything You Wanted to Know About Roof Mold 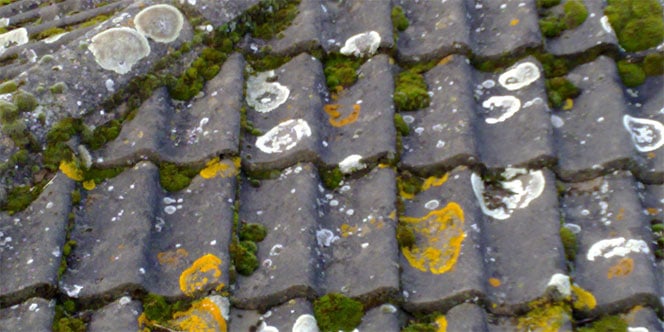 A dirty roof is actually full of more than just dirt. Most dirty roofs are covered in various molds, algae, fungus, and lichen. If your roof was simply covered in dust, it would be very easy to clean, but due to the presence of the algae, mold and so forth cleaning a roof becomes much more involved. In this article we discuss some of the most common of these creatures.

Roof algae is most commonly Gloeocapsa magma (which isn’t even algae but a bacteria). Put most basically this bacteria phtolyze (eat) water and expel oxygen. It is responsible for creating the black staining on the roof. f cyanobacteria. Concrete roof tiles (very common in southern California) offer a attractive breading grounds for the algae. Concrete tiles have a more porous surface than clay tiles, it is like a English muffin, all the nooks and cranny create a great place for the algae to grown, they trap moisture and concrete can leach calcium carbonate which attractive to the algae. The black stain that you see is a build up of the algae and a protective UV coating that prevents the sun from burning off the Algae.

Beyond the mere fact that it doesn’t look so great to have a dirty black algae covered roof, the bacteria can actually granulate the surface of the tiles and in the case of concrete tiles reduce the color of the dye in the concrete. The Algae generally cause no permanent harm to true clay tiles.

Once the bacteria have become noticeable, the stains will continue to worsen year to year. There is debate over the actual harmfulness of this particular bacteria to roofs, as there is little supportive scientific research. However, most “experts” within the subject area conclude the bacteria to be harmful, if left untreated, as the growth holds moisture within shingles causing premature aging, rotting, and/or granule loss.

Roof Lichen are symbiotic organism where fungus and algae live in a dependent relationship, unfortunately their relationship can cause real damage to your roof. Lichen are sutborn and are very diffcult to remove, unlike the roof algae roof lichen are persistent and deeply adhered to the roof. Some homeowners attempt to use harsh acids or cleaning chemicals to remove the lichen but even if these due end up killing the lichen, the organism still remains deeply adhered to your roof.

Traditionally Lichen have been used to make dyes, and this may be one reason that lichen can actually remove the dye from concrete tiles. In the picture to the right you can see patches on the tile that are no longer red, this is from lichen that has removed the concrete dye from those areas. Sometimes we find roofs (especially in beach cities like Santa Monica, Newport Beach, and Laguna Beach) where whole areas of the roof are covered in lichen, and much of the dye has been removed.

Chemicals and cleaners are mostly ineffective at removing lichen. The only real way to remove lichen it the use of a pressure cleaning. Pressure cleaners take advantage of the hardness difference between the lichen (soft) and the tile (harder), everything other than tile is able to be removed. While this does nothing to repair the dye removal, it will prevent the progression of the lichen. Luckily lichen take years to develop and will not return for a long time after the roof has been effectively cleaned.

There are over 12,000 types of moss, most grown in clumps, and release spores into the air. You can control the growth of moss on your roof by ensuring that your roof properly drains so that water does not stay on your roof. Moss will generally only grown on the shady side of your roof. Moss can be killed with a selection of products from bleach, to zinc, and lime. The effectiveness of zinc is questionable (see this article)  The issue with moss is similar to that of Lichen, in that even once the moss is dead it will not be easily removed.

Roof moss is most destructive to composition (asphalt shingle) roofs. The moss causes premature degradation of the asphalt which can lead to leaking roofs. On tile roofs moss leaves behind a residue, and dark rings where each moss was growing.

Squeegee Pro has been a family owned business that value our employees and aim to make a great place to work so that our customers receive the best experience.